Home / Blog / News / An Taoiseach, Mr. Enda Kenny TD is joined by Minister for Health Simon Harris TD and members of the Youth Advisory Council to cast the foundation stone for the new children’s hospital

An Taoiseach, Mr. Enda Kenny TD is joined by Minister for Health Simon Harris TD and members of the Youth Advisory Council to cast the foundation stone for the new children’s hospital 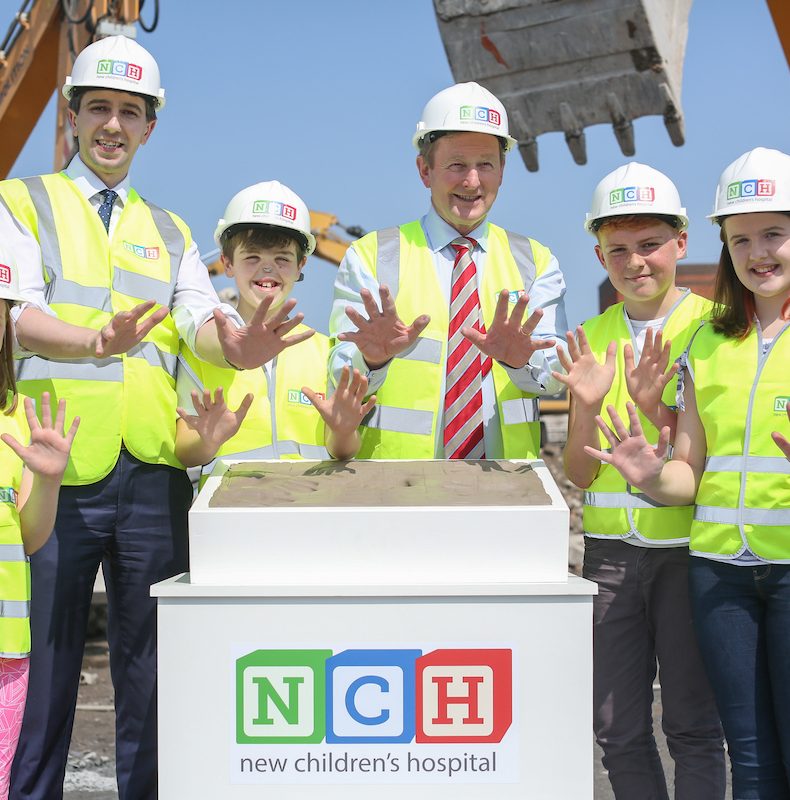 An Taoiseach Enda Kenny TD, together with Minister for Health Simon Harris TD and members of the Youth Advisory Council, cast the foundation stone for the new children’s hospital. The children, current and former users of the children’s hospital services, and the Taoiseach embedded their hands into a mould which will be cast in cement and incorporated into the new hospital.   This milestone event follows the recent approval by Government of the investment required to enable the National Paediatric Hospital Development Board to award the construction contracts for the building of the main children’s hospital on the St James’s Hospital campus and the two Paediatric Outpatients and Urgent Care Centres on the Tallaght and Connolly Hospitals campuses.  The installation of the foundations is expected within a matter of weeks.

The children at the photocall were representatives of the Youth Advisory Council – a group of young people who are current and former users of the three existing  hospitals.  They have spent many hours talking to the team designing the new children’s hospital.  They have been involved in every step of the project, helping to inform the design and suggesting the inclusion of facilities and features that would help children and their families who stay in hospital for long periods of time. An Taoiseach spoke about the significance of this major capital investment project: “The children’s hospital is one of the most exciting public capital projects that this country has ever embarked on. We are finally here, with the foundation stone cast, and ready to build the world class paediatric hospital that our children need and deserve.  We all want the best for children, who after all represent nearly a quarter of our population and the future of this nation, and for their families.”

Minister for Health Simon Harris TD said: “The new children’s hospital is an extraordinary opportunity to transform paediatric services for children in Ireland by bringing together patients and staff from across the three existing children’s hospitals into a single organisation, which will improve the experience and outcomes for children and their families.  In time the Coombe Women and Infants University Hospital will relocate to the St James’s campus, achieving tri-location of adult, paediatric and maternity services, and creating a campus of unrivalled clinical expertise to support the delivery of highly specialist health services, research, innovation and education.”

The Youth Advisory Council said, “We are delighted to be joining Taoiseach Enda Kenny and Minister for Health Simon Harris today in capturing all our handprints in the foundation stone which will be on display in the new children’s hospital for future generations. The Youth Advisory Council will continue to work with the Children’s Hospital Group Board in the months and years ahead in designing the services that will be provided.” 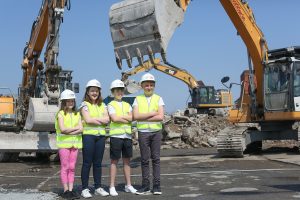 Speaking at today’s event, Chairman of the Children’s Hospital Group Board, Dr. Jim Browne spoke about the role that the Taoiseach has played in ensuring that Ireland finally gets the hospital that it badly needs and deserves. Dr. Browne outlined the Taoiseach’s consistent prioritisation of children’s rights: “We are eternally grateful for the conviction of the Taoiseach which has led us to where we are today. It is fitting that his handprint – together with the handprints of children –  is embedded in the foundation stone and that it will be there visible for all to see for generations to come when the hospital is fully operational. His mark will forever be on this building – and will positively impact the lives of children and their families now and in the future.  I would also like to acknowledge the role of Minister Simon Harris who has championed this project since his appointment in the Department of Health and has worked tirelessly to make today a reality.” Tom Costello, Chair of the NPHDB said: “The development team and our colleagues in the Children’s Hospital Group are proud and privileged to be working on this important project.  This is not just a building. This is about the healthcare of infants, children and young people today, and the health of their children and grandchildren in decades to come. “Collectively, we are building a hospital which will enable heroic work to be performed.  It will house some of the most exciting and advanced research in the world; it will provide comfort to families going through difficult days and it will provide a light filled and positive environment for the wonderful staff of the children’s hospitals to continue to do amazing work. This project is about the children. 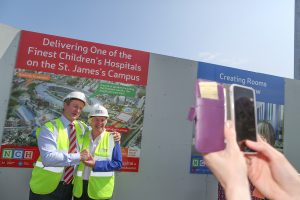 An Taoiseach, together with Minister Harris and Minister Byrne viewed the extensive area that will soon be built upon and were given an update on the construction programme.

” An Taoiseach and the Minister for Health today visited the site of the new children’s hospital on a campus shared with St. James’s. As the enabling works conclude, the 12 acre site is clear and ready for commencement of construction.