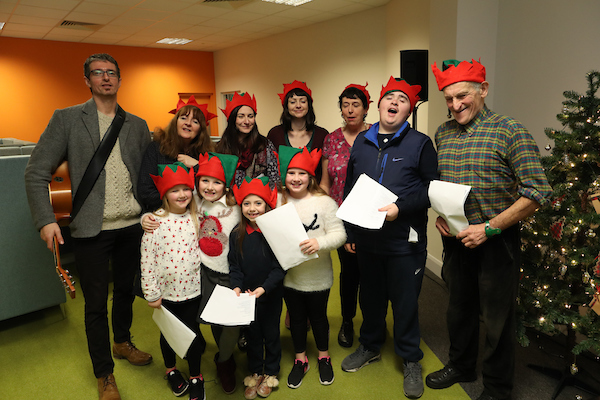 More than 80 staff relocate to Fatima

Press Release 22nd December 2016: With the first phase of construction now underway on the site of the new children’s hospital on a campus shared with St James’s Hospital, some 80 staff working with the Children’s Hospital Group and the National Paediatric Hospital Development Board have relocated from their offices on the St James’s Hospital Campus to the F2 Centre in Fatima.

Public representatives, community leaders, city council officials and other residents of the F2 Centre joined the CHG and NPHDB at an event in the F2 recently to mark the move.

The F2 Centre was established in 2010 as part of the physical, social and economic regeneration of Fatima Mansions. The role that the new children’s hospital will play in the regeneration of Dublin 8 was highlighted and celebrated at the event.

Eilísh Hardiman, CEO of the Children’s Hospital Group, said; “The new children’s hospital is the most significant investment in a healthcare project in the history of the State and it’s very important to us that the local community benefits from having the hospital as a neighbour, now and for generations to come.”

John Pollock, Project Director of the National Paediatric Hospital Development Board, which is responsible for designing, building and equipping the new children’s hospital, said; “We have been working with community groups since the start of the planning process to ensure that the local community are involved in the development of the hospital. We have a full-time Community Benefit Programme Manager on our staff who is working to deliver on our ambitions to deliver tangible benefits for the local community.”

A Community Benefits Oversight Group, made up of members from a wide range of relevant stakeholder groups in the community, is working to ensure that all opportunities in terms of health, training, career opportunities and local business development are fully leveraged. Members include; St James’s Hospital; Dublin City Council; Department of Social Protection; CDETB; HSE; An Garda Síochána; Community groups; Local regeneration boards; and an independent Chairman.

Eibhlin Byrne, Chairwoman of the F2 Enterprise Centre said; “In welcoming NPHDB and CHG to Fatima and Herberton I am very conscious that this is a unique opportunity for all of us. It is a time where hope and history really rhyme, where the long history of Fatima is acknowledged and where there is phenomenal hope and opportunity for the young people of the area. Already the arrival of new colleagues has brought a buzz and excitement to Reuben Plaza. The future is looking good!”

Joe Donohoe, Project Manager, Fatima Groups United said; “We’re delighted that the CHG and NPHDB are now occupying the largest retail unit in Herberton. We’ve been working with the CHG and NPHDB for the last number of years to ensure that local people benefit from this project in the best possible way, through social, cultural and economic development, and we are thrilled that the first phase of construction on the site of the new children’s hospital is now underway. The opportunities for collaboration between the hospital and our local community are endless and very exciting, and having the project team on our doorstep and in the heart of the Fatima community brings it to another level. Fatima has been undergoing significant regeneration in the last number of years and the development of the new children’s hospital nearby on the St James’s Hospital Campus will be a fantastic further catalyst for growth.”

The first phase of construction on the site of the new children’s hospital on a campus shared with St James’s Hospital began in August 2016. The NPHDB is currently reviewing and evaluating the tenders for the main & specialist contractors for the new children’s hospital and for the two paediatric OPD and urgent care centres at Tallaght Hospital and Connolly Hospitals, which have also received planning permission. Once this process is complete, and subject to Government approval, the main contractor will be appointed and works will commence in the new year.
As is best practice internationally, the new children’s hospital will be tri-located with an adult teaching hospital – St James’s Hospital – and in due course, with the relocated Coombe Women and Infants University Hospital. A new Children’s Research and Innovation Centre and a 53 Family Accommodation Unit – also be developed on the campus.