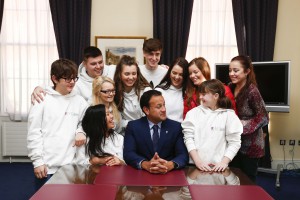 The National Paediatric Hospital Development Board has appointed international design practice BDP as architects for the new children’s hospital on the St. James’s Hospital site in Dublin 8.

The new children’s hospital will provide:

384 in-patient beds including 62 critical care beds, all in single en-suite rooms – with allocated number of larger rooms for therapists

World-class care and treatment for a projected 28,258 inpatients per annum

14 theatres in total, including three hybrid theatres to facilitate access to imaging during surgery

ED and urgent care facilities in both the new children’s hospital and satellite centres.

Attending today’s announcement Minister for Health Leo Varadkar T.D. said, “Today marks another major milestone for the new children’s hospital. It’s full steam ahead. I expect the design team to finish its work in early summer in order to secure planning permission and begin site clearance and enabling works next year at St James’s. Work will also start next year at the satellite centres in Tallaght and Blanchardstown. Ireland’s children deserve a world-class hospital. We’ve been promising it and talking about it for far too long. Let’s get building.”

Speaking about his vision for the new children’s hospital, Benedict Zucchi said, “We are aiming to create a hospital without precedent, the finest medical facilities in a sustainable building, featuring a sequence of spaces inside and out where children’s creativity and freedom of body and mind thrives. It’s about delivering the best environment for care and treatment to flourish.”

“With the appointment of our Designers we now have the companies and individuals who have the motivation, expertise and experience to produce an outstanding design. Their combined portfolio includes major hospitals in Ireland, North and South, UK, Austria, Spain and Middle East as well as such notable projects as the National Conference Centre, Aviva Stadium and Croke Park.

“Child-centred design is the priority for this healthcare project and I am confident we have selected a world-class design team that will produce a truly modern, therapeutic and visionary facility for the children and young people of Ireland.

“Benedict’s expertise in healthcare, coupled with his understanding of designing for children, uniquely places him to lead this project and set the new world-standard for children’s hospitals. I have been struck by how his buildings enhance the quality of the surroundings, and I look forward to working with his team to create a facility that revitalises the community in Dublin 8.

Commenting further at today’s announcement, Zucchi said, “All hospital projects present a complex array of issues but paediatric facilities pose a number of unique challenges because of the nature and age-range of the children and young people and the close participation of their extended families. We know from our work on hospitals and schools, that children are particularly sensitive to the quality of their surroundings, so design considerations to do with colour, light, scale, views, which are important in all buildings, are doubly so in a paediatric hospital.

“All of these design dimensions will be explored over the life of the project and we will ensure that this is done as interactively and enjoyably as possible with children, family and staff groups, so that we can harness their imagination and insight.

“This is most effective when everyone can rally around a compelling and simple design vision – a ‘big picture’ that is easy to understand but also flexible enough to accommodate the multiple contributions of different stakeholders without losing touch with its inherent initial appeal.”

The design team will now begin an engagement process with the various stakeholders for the new children’s hospital, to include children and young people, families, staff, patient advocacy groups, the community and Dublin City Council. This process will consider the needs, views, and wishes for the new children’s hospital and this insight will be used to inform the design vision.

“As client for the project, we are reassured in the Development Board’s appointment of a Design Team that demonstrated an understanding of our brief for the project and a shared vision to create a truly modern, therapeutic and supportive environment that will drive excellence in paediatric care.

“As we enter design phase for the project, I also welcome the strong endorsement of the design team by the three children’s hospitals and thank them for their ongoing support and collaboration.”

BDP has been active in Ireland since 1965 and has had a permanent presence in Dublin since 1991. The Dublin Studio has established a particular reputation for high quality sustainable and user-centred design, particularly in the education sector.

Head of BDP’s architectural healthcare team in London, Benedict Zucchi was selected for the position of lead architect owing to his extensive experience designing child healthcare facilities. Zucchi was responsible for the design of two children’s hospitals in the UK, the Royal Alexandra Children’s Hospital in Brighton (2007) and Alder Hey Children’s Hospital in Liverpool (due to open in September 2015).

In addition to paediatric hospital experience Benedict Zucchi and his team bring an in-depth understanding of major healthcare projects, including Pinderfields General Hospital in Wakefield, Queen Elizabeth Hospital in Birmingham and the recently opened Southmead Hospital in Bristol, all of comparable size and complexity to the new children’s hospital.

Zucchi’s focus on innovative healthcare design began in Ireland with the commission for St Joseph’s Hospital in Cork, which was winner of a Royal Institute of British Architects Award in 2001.

In Brighton, Zucchi recast the identity of the hospital giving it a memorable new form, as the ‘Children’s Ark’. Known locally as ‘The Alex’, it sits within a much larger adult campus and is today, a distinctive feature on the city’s skyline.

BDP’s coherence of design vision for the Royal Alexandra Children’s Hospital in Brighton was recognised with the Prime Minister’s Better Public Building Award in 2008, the highest accolade for a publically procured building in the UK.

“The challenge in Brighton was a very congested, steeply sloping, site and a context that threatened to engulf and marginalise it as a longstanding independent institution. The kernel of the project’s success was the way in which the building was shaped around a central social space, bowing out externally to maximise the amount of floor area and thereby creating its unusual boat-like form.

“The ‘ark’ idea was something all users, children, parents and staff, could relate to and which guided decisions on all aspects of the building’s detailed design, from colours to signage and furniture.

At Alder Hey’s Children’s Hospital in Liverpool, Zucchi and his team have established a very different identity for the 60,000 sq. m facility, based on the vision of a ‘children’s health park’. Hailed as Europe’s greenest hospital because of its sustainability credentials and the unique scale of its rooftop gardens, Alder Hey has already become a local landmark.

O’Connell Mahon Architects has evolved from one of Ireland’s long- established architectural practices and is recognised as pre-eminent in specialist healthcare design.

OCMA has delivered over 100 healthcare projects to both public and private clients over the past fifteen years, often in partnership with others. This includes the Midland Regional Hospital at Tullamore, Radiation Oncology Buildings in Beaumont and St. James’ Hospital and the Critical Care Block at University Hospital Limerick. O’ Connell Mahon were previously appointed to design the Children’s Hospital at the Mater Hospital site in Joint Venture with NBBJ Architects of the US. OCMA are currently developing a design for a new 120 bed extension to the National Rehabilitation Hospital in Dun Laoghaire and were recently appointed to design the National Maternity Hospital at St. Vincent’s University Hospital in Dublin.

Headquartered in Dublin, Bruce Shaw are an international firm of quantity surveyors. Irish based and with over 100 people employed in the Dublin office, and over 350 people worldwide, Bruce Shaw has been to the forefront in the delivery of some of the most exciting and challenging construction projects undertaken in Ireland. The dedicated healthcare division has a unique appreciating of the factors around the delivery of world class healthcare facilities on existing hospital campuses.

Arup first started business in Dublin in 1946, and has grown into one of Ireland’s largest consultancies, now employing 380 staff in their four offices in Ireland. Arup Ireland is part of the global Arup organisation, a company synonymous with some of the world’s most iconic projects.

The healthcare sector is a key business area for the company where it continues to invest and collaborate on research; an example of this work is the building physics research into the prevention of hospital-acquired infections.

Local resources, combined with global expertise, will bring this international best practice to the design and construction of the new children’s hospital.

O’Connor Sutton Cronin (OCSC) is a 100% Irish owned consulting engineering practice with a strong reputation for design creativity and excellence in sustainable designs, providing practical solutions to complex and unusual challenges, all within strict programme and cost environments. Since its foundation in 1988, the company has grown to become one of the leading Irish multidisciplinary engineering consultancies in the state.

OCSC have developed a long-standing working relationship with the Health Services Executive (HSE) over 25 years of practice and has been retained to provide consultancy services to the public health boards over the years.

The company has a proven track record in the delivery of a wide variety of healthcare projects both acute and non-acute of varying scales and complexities, working on some of the main hospital campuses including Connolly Hospital, Blanchardstown; Mater Hospital; St Vincent’s University Hospital; Our Lady of Lourdes, Drogheda and Cherry Orchard Hospital, Dublin.

OCSC has partnered with international structural engineers Thornton Tomasetti for the Civil/Structural Engineering Design of the new children’s hospital. Thornton Tomasetti is responsible for the design of over two million square meters of healthcare facilities in the US.